HOW THE FREDERICK DOUGLASS DAGUERREOTYPE CAME TO CCHS

How was it that a gift made from one freedom fighter to another, was gifted again, so that Frederick Douglass’ daguerreotype came to reside in the very building where he spoke on two occasions?

The first time I saw the Frederick Douglass ca. 1848 daguerreotype was as a new employee at CCHS.  I was sent to our off-premises storage facility to survey 450 boxes of material given by historian Albert Cook Myers (1874-1960). His William Penn Papers were accessible to the public in our library vault, but the rest of the collection was too massive to fit in our limited space.  I was to survey the photographs and come up with a processing work plan and estimate for archival supplies.

As I opened a large steamer trunk, I followed along on the inventory. It contained a mix of materials, Albert Cook Myers academic gown, copies of his books, and a box labeled cased photographs. I expected to find tintypes of Myers’s ancestors but instead my jaw dropped as I opened the miniature case of a brilliant daguerreotype of Frederick Douglass!  It contained a tiny note inside in Albert Cook Myer’s handwriting: “Frederick A. Douglass presented by him to Susan B. Anthony whose niece, Miss Lucy E. Anthony gave it to Albert Cook Myers.”

The provenance took my breath away. Douglass himself gave his own image to Susan B. Anthony! Thus began my journey to verify this amazing story.

I wrote to the Susan B. Anthony house in Rochester New York and their curators graciously verified that according to an inventory taken of the house, Douglass’s daguerreotype had been displayed on her mantelpiece.  They had no information on the occasion when Douglass gave it to Anthony.

Albert Cook Myers was given the daguerreotype by Lucy Anthony, Susan B. Anthony’s niece. 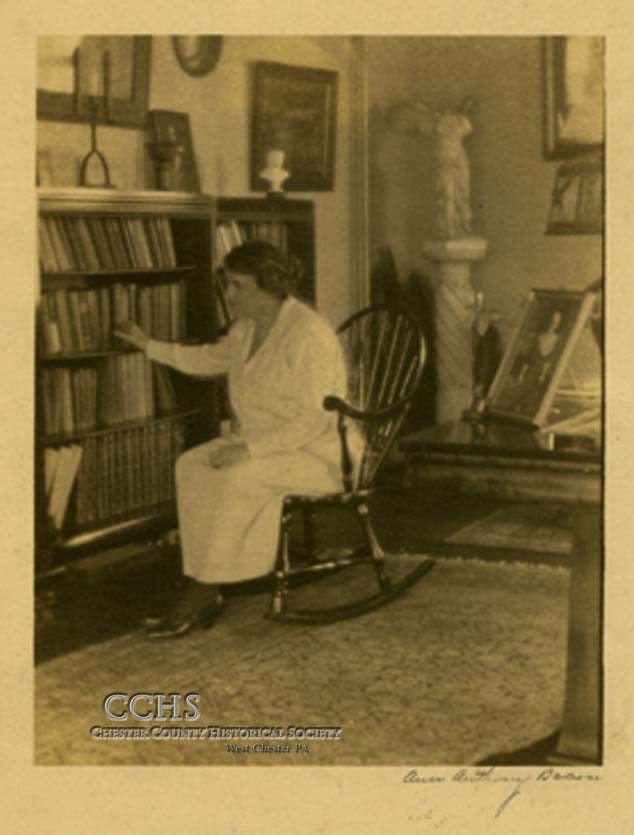 Lucy Elmira Anthony (1859-1944) worked for many years as a secretary for her aunt. In this capacity she met all of the important figures working for Woman suffrage. One of Susan B. Antony’s visitors was Anna Howard Shaw (1847-1919), who was not only an activist for woman suffrage but was also a physician and an ordained Methodist minister. When she met Anna Howard Shaw in the 1890s, she became her companion, the two lived together for thirty years. 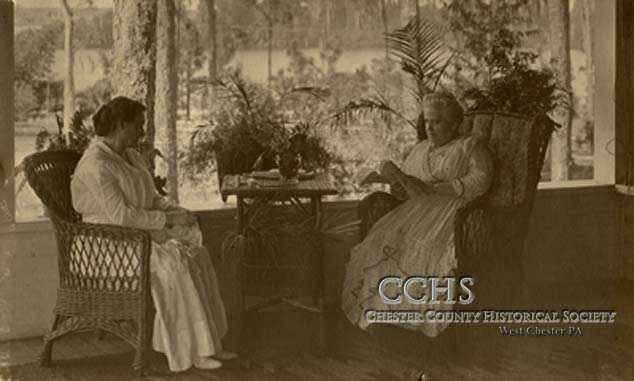 The relationship of the Myers and Anthony-Shaw families can be seen through photographs that are in Myers collection. Lucy Anthony and Anna Howard Shaw lived next door to Albert Cook Myers and his mother in Moylan, Pennsylvania. 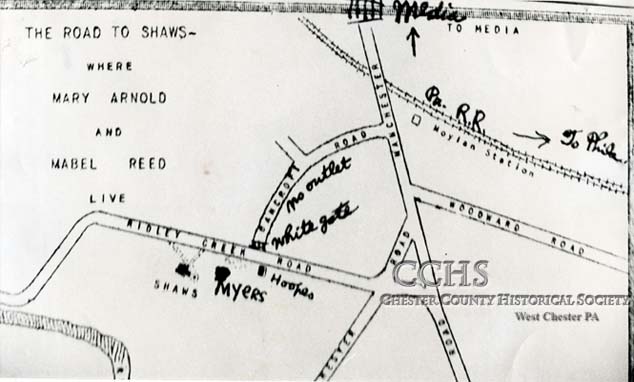 Anthony and Shaw were quite fond of Albert’s mother, as can be evidenced through numerous Christmas cards and postcards they sent.  On one occasion in 1934, Lucy Anthony’s sister, Ann Anthony Bacon photographed Sarah Myers having tea at Anthony’s home. 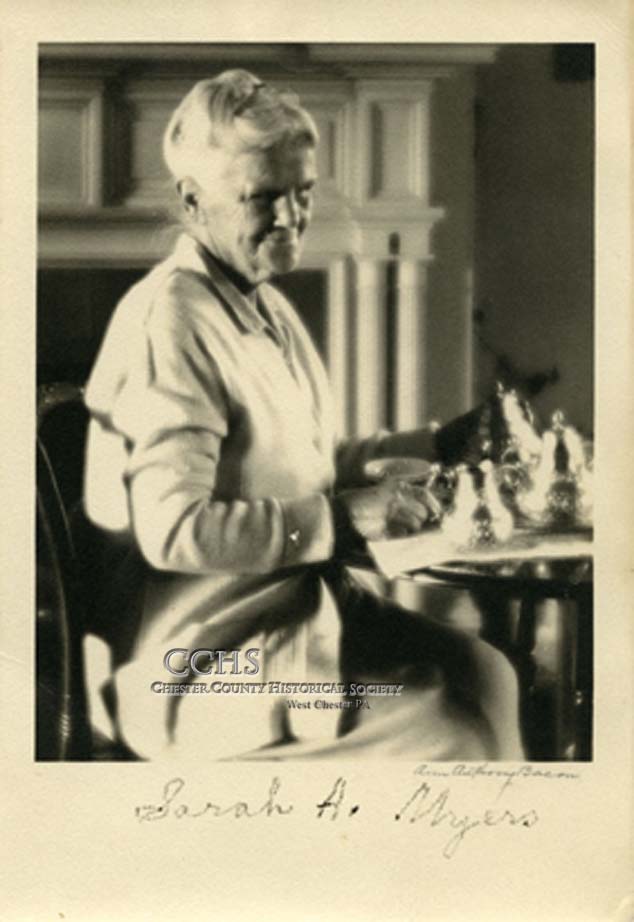 Albert Cook Myers documented on the reverse of the photograph, how the mantelpiece in the background had been removed from Susan B. Anthony’s home in Rochester and was installed in the house occupied by Miss Anthony and Anna Howard Shaw.  Myers further notes that the mantle was originally made by Brigham Young for Susan B. Anthony! This was the very mantle upon which Douglass’ daguerreotype had been displayed. 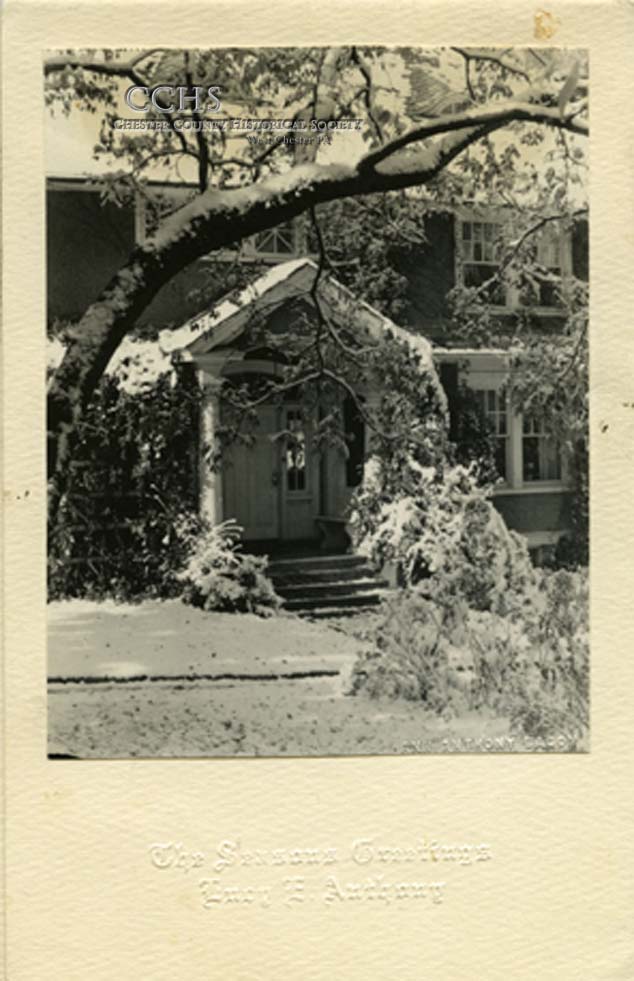 Who was Albert Cook Myers?

Myers was a historian, genealogist and author who was best known for his compilation of the works of William Penn.  Born in York County, PA to John T. and Sarah Cook Myers in 1874, Albert graduated from the Martin Academy in Kennett Square. According to his obituary in the Daily Local News published April 2, 1960, Albert Cook Myers received advice and encouragement from Gilbert Cope in his youth. Cope was one of the founders of the Chester County Historical Society in West Chester, PA.

Myers received his undergraduate and master degrees from Swarthmore College in Swarthmore, PA in 1989 and 1901 respectively. He went on to receive his PhD In literature from Franklin & Marshall College in Lancaster in 1932.

Myers spent many years working on compiling the works of William Penn, using the collection at the Historical Society of Pennsylvania extensively.  In 1932 he directed the William Penn Commemoration events in Philadelphia.

He belonged to numerous historical organizations including the Friends Historical Association, the Chester County Historical Society and others.

He was the author of many books and articles including: The Immigration of Irish Quakers in Pennsylvania, Hannah Logan’s Courtship and Sally Wister’s Journal.  Myers researched many topics that never reached publication. One such topic was the story of Kitty Payne of Adams County, PA who was kidnapped with her children and enslaved.  She was eventually freed after court intervention. Myers conducted extensive interviews with Payne’s descendants and community members.

After living in Moylan with his mother for many years, Myers retired to West Chester, PA where he donated his entire collection to the Chester County Historical Society in 1955.  A member of the Society of Friends, he died in 1960 and was buried at Providence Meeting. He was posthumously elected to the National Genealogical Hall of Fame.