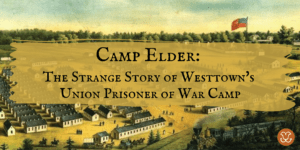 Historian Dave Walter has uncovered the records of this P.O.W. camp and woven a fascinating tale of the stories of those who commanded the camp and those who were its prisoners. His power point presents fascinating tales of tragedy, humor, and even an amazing love story, as these Union soldiers from all over the North were greeted by, and cared for by, the residents of West Chester and surrounding townships.

Reserve Your Spot by Clicking HERE

Admission is Pay as You Wish! A donation of $10 is greatly appreciated, but if you are unable to make a donation at this time, a limited number of free tickets are available.